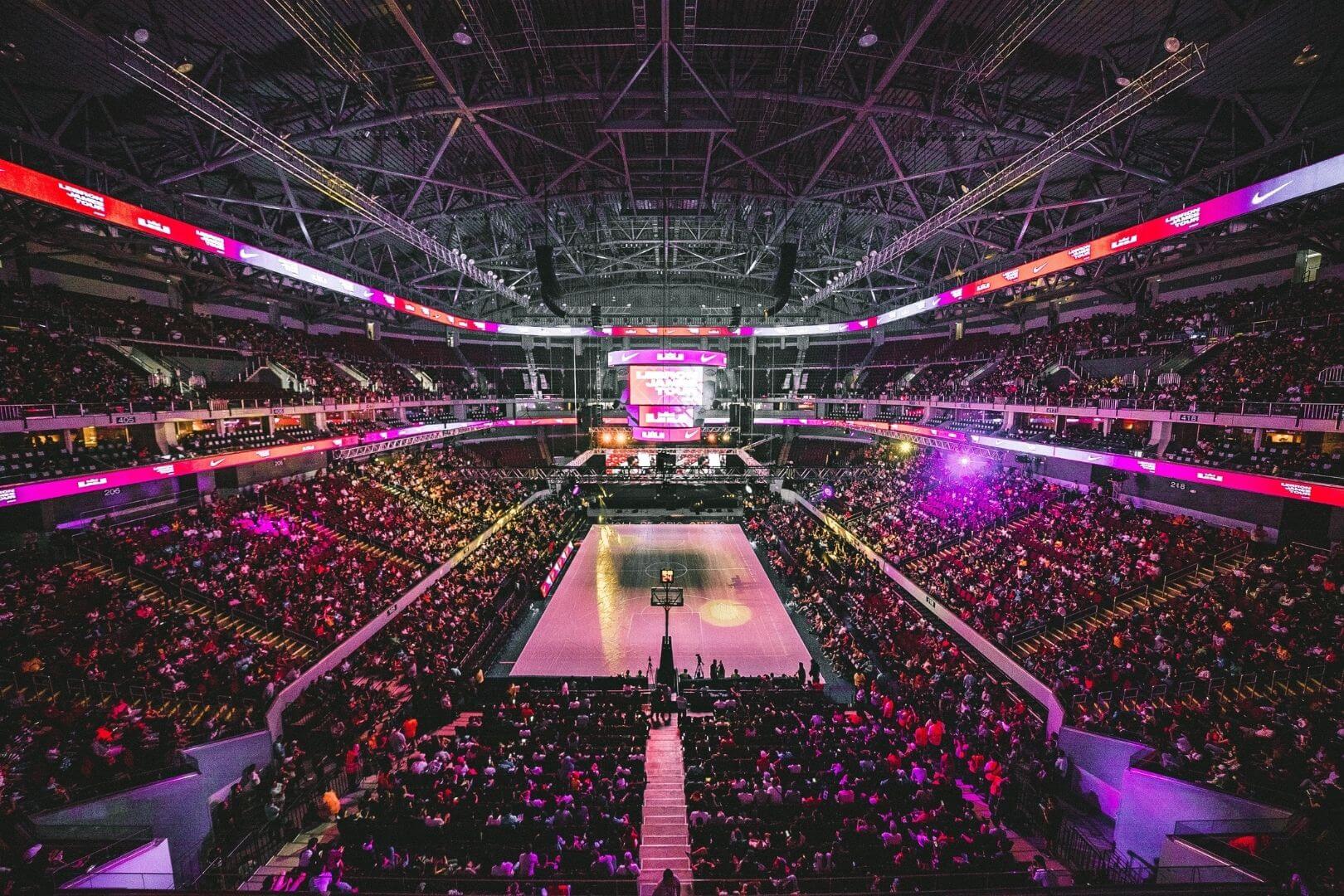 Can the playoffs hurry up? We’re keen beans to see which matchups we’re going to get in the first round of the post-season, but there are still a lot of regular-season games and then the play-in tournament to get through before we get into talk of the championship.

It has been a mad year due to the COVID-19 protocols that hurt the league, but things have been stable since January and we’re beginning to see the teams that appear dangerous in the playoffs and which will be looking forward to the NBA Draft to arrive.

The Lakers better watch out, because the Spurs are on their tail for the 10th place and entry to the play-in tournament. The team might be 28-44 and 11th place in the West NBA standings, but a huge win over the Warriors last night was just the remedy to keep the post-season on the horizon.

It was Spurs guard, Keldon Johnson, who snatched the rebound from Jakob Poeltl’s missed free throw attempt and threw the ball into the basket with milliseconds remaining in the game. The shot gave San Antonio a 110-108 lead, and despite a decent attempt by the Warriors for the win at the other end of the court, the Spurs held on for a much-needed victory.

Although it was Johnson who saved the day for the Spurs, Josh Richardson’s 25 points off the bench and Dejounte Murray’s 19 also helped San Antonio keep things close against the Warriors. The Spurs have gone 4-6 in their last 10 games, and even though it’s unlikely the Lakers will drop out of 10th spot, it nevertheless makes the last remaining regular-season games incredibly interesting down the stretch.

For the Warriors, going 4-6 in their last 10 doesn’t mean the sky is falling, especially as they remain 3rd place in the West, and this was an odd game overall. Draymond Green, in a very typical fashion, barked constantly at the refs throughout the game, and after receiving two techs for his trouble, was promptly ejected in the third quarter. As well, Stephen Curry is still out after injuring his left foot against the Celtics last week, but there’s optimism he’ll be fit and ready for the playoffs.

It’s not like the Warriors weren’t in the game at all, as Jordan Poole’s 28 points and Klay Thompson’s 24 were small highlights for the home team, but a freakish rebound and good timing from Keldon Johnson was all it took for a Spurs win in the end. The Warriors were a bit sloppier with the ball, but not by much, as they had 15 turnovers compared to the Spurs’ 11. San Antonio is a plucky, youthful team and has caught experienced opponents off guard all through the season.

The return of Andrew Wiggins from injury is a good sign for a Warriors team needing a boatload of offense with Curry missing, but maybe things aren’t so bad. Curry gets to rest before the intense playoffs start, and Andre Iguodala is waiting in the wings for a major post-season run. Klay is starting to look like the player we used to know, and if Draymond can keep his mouth shut, then the Warriors will be lethal in the playoffs.

The worst news in Warrior World came from the fact that No. 2 in the 2020 NBA Draft, James Wiseman, is still suffering from knee soreness and will almost certainly not compete until next season. The talented center is still light years away from adjusting to a fast Warriors system, and learning this on-the-fly during the playoffs is just not the time and place.

Pelicans looking better than ever against Hawks on Sunday night

Zion who? The New Orleans Pelicans continued their hot streak by coming away with a tough road win, 117-112, against the Hawks. Talk of their star player, Zion Williamson, returning from injury has surrounded the team since the start of the season. But despite rumors that Zion is close to playing again, there has been no official word yet. The Pelicans are simply blocking everything out and playing great at the right time.

With Brandon Ingram and Devonte’ Graham both out of the lineup for the Pels, it was up to Jonas Valanciunas’ 26 points and 12 rebounds and CJ McCollum’s 25 points that helped the team come away with a sorely-needed win over Atlanta.

New Orleans shot out to a huge lead after a 35-18 first quarter and looked unstoppable, but to their credit, the Hawks battled back and even tied the game late in the fourth quarter. Solid defense and the continued stellar play of Valanciunas were just enough for the Pelicans to cling on to the victory.

The Hawks were messy with the ball and continually turned it over in the first quarter, but whatever coach Nate McMillan said at halftime must have worked, as they came out firing and kept it close until the very end. Both teams finished with 16 turnovers, funnily enough, as it looked like Atlanta had 120 turnovers at the start of the game.

Hawks star Trae Young didn’t shoot the ball particularly well, as he ended up with 21 points from 5-14 attempts, but he did go 8-8 from the free throw line. Danilo Gallinari’s 25 points for Atlanta was a bright spot in an otherwise fairly forgettable game. In fact, it’s been a forgettable season for Atlanta, as the team looks nothing like the one that went to the Eastern semi-finals last year and almost knocked off the eventual champs, the Milwaukee Bucks.

The news doesn’t get much better for the Hawks, as John Collins is expected to be out for two weeks due to persistent foot and finger injuries. Atlanta badly misses his rebounding (averaging 7.8) and inside/outside scoring (averaging 16.2 points). It’s likely that Atlanta will stay in 10th place in the East NBA standings and be okay for the play-in tournament, but injuries and health and safety protocols decimated the lineup early in the season.

Don’t miss these two on the NBA schedule.

The Mavs and the Wolves are fighting for better playoff spots, as they are 5th and 6th in the West NBA standings, respectively. The Mavs have looked far better since the Porzingis trade, but the Wolves are rolling from KAT’s incredible season and the team chemistry is the best it’s been for decades.

It might be that the Mavs come into the game as underdogs, as the Wolves are currently 9-1 in their last 10 (dealing out trash talk nicely too) and KAT is taking over the league by averaging 24.9 points, 9.9 rebounds, and 3.7 assists per game. If the Wolves can keep up their incredible run and KAT continues his amazing season, then they have every shot of beating the Mavs and possibly jumping a spot in the standings.

With Kyrie Irving able to play due to this being in Miami (he’s still not allowed to play in New York due to vaccination rules) and Kevin Durant back in form, the Heat should be very worried about this lineup visiting their arena. Well, maybe not too worried, as the Heat are still first in the East and have everyone, especially guard Tyler Herro (a certainty for 6th Man of the Year award), firing on all cylinders and are getting ready for a deep playoff run.

The Heat again look like the team that went to the Finals against the Lakers in the 2020 bubble Finals, plus, any team with Jimmy Butler is never to be doubted, as the guy doesn’t believe in quitting at any point in the game.

The Nets will be without Ben Simmons, as he continues to rehab a lingering back injury, which is a shame because the entire basketball world is eager to see the former 76er show us he’s still worthy of the trade for James Harden. However, Irving and Durant are enough for a win, and somehow we think the Nets will display incredible form and beat the Heat in a statement victory.