Needless to say, American football is one of the most established sports on TV. However, it is generally underappreciated outside of the United States and Canada, since it’s usually overshadowed by other sports like soccer and the rather similar sport of rugby.

How the Game Came to Be

American football originated from a convergence of rugby and soccer, drawing aspects from both games. The first match of American football was played on 6th November, 1869, between 2 college teams: the Rutgers and Princeton, which are both still active. The first match used rules that were heavily based on soccer: the ball they used was round and could not be picked up and carried, much like in soccer. However, unlike soccer, the ball could be hit with the hands without any penalties. During the end of the 1870s, teams started favouring rugby-like rules. In spite of this, there was much dispute during the 1870s about the preferred rules of the sport: different colleges played the sport differently, and even Canadians played differently from their American neighbours! It wasn't until 1880 that Walter Camp gave us the rules we know of today. Known as the Father of American Football, Camp managed to establish the size of teams to the current 11 players, and introduced the snap (that is, the backwards pass of the ball at the start of the game) to replace the unpredictable scrum. After a few more rule revisions, American football was finally born. 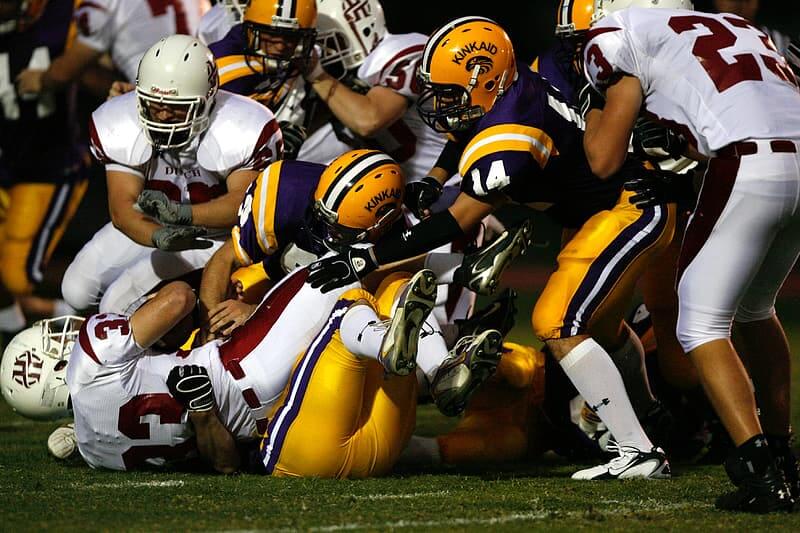 The NFL stands for the National Football League, and is one out of four major professional sports leagues in North America, the highest levels of professional sports competitions in both Canada and the United States. The NFL is the topmost professional competition of American football around. The NFL was first founded in 1920, where it was known as the American Professional Football Association, or APFA for short, until a name change in 1922. It's one of the most highly attended and watched sports events in the world, making it a great contender for football on TV! 32 teams participate in the NFL over a 17-week period, where each team will play 16 games. The best 12 teams will then advance to the final rounds, which are a series of single-elimination rounds. The best 2 teams will then play in the Super Bowl for a chance to win the entire league!

The aim of the game is for one team to get more points than the other (duh!), and there a few ways of doing this. The game proceeds in a series of downs, or stages of play, where the offence, the team with the ball, attempts to advance to the end zone, the opposite end of the field, for a touchdown. Otherwise, the offence may attempt a field goal, by kicking the ball through the vertical goal posts for 3 points. After a touchdown, which gives 6 points, the offence may attempt a conversion, an attempt to score extra points, either by a field goal for 1 point, or another touchdown for 2 points. Meanwhile, the defence, the team without the ball, attempts to stop the advance of the offence. If the defence manage to acquire the ball, they may themselves attempt a touchdown. Otherwise, they can get 2 points for a safety, by tackling the offence's ball-carrier in the offence's end zone.

Leagues and Tournaments to Watch on TV/Live Stream

"But, what about American football outside of the U.S.?", you might ask? Not to worry, for there are options here as well! The BIG6 European Football League, or BIG6, is the current most prestigious and important tournament of American Football in Europe, which culminates in the Eurobowl! Apart from the Eurobowl, there is also the EFAF Cup, the Atlantic Cup, and the Challenge Cup. Outside of Europe, one can find the International Federation of American Football, or IFAF, which hosts tournaments like IFAF World Championship and the IFAF Women's World Championship!

The Excitement of American Football on TV

Fans of rugby and football on TV should seriously consider watching American football! With so many professional leagues and competitions around, there will be some serious athletes playing their best on the field! It couldn't get any more exciting!