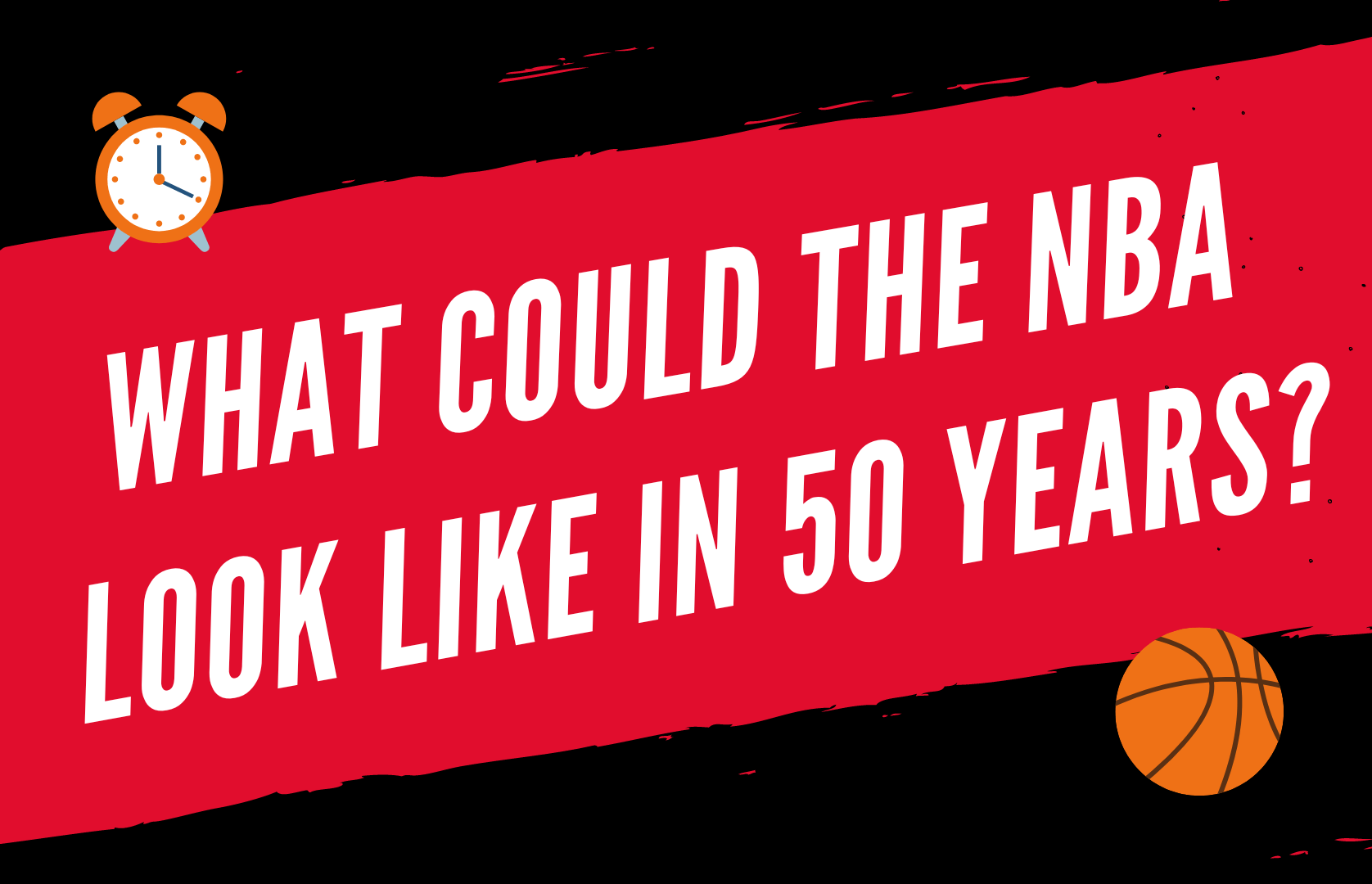 Sports are always changing over the years. What the NBA looks like now is no indication of the future.

It’s funny to think that in the early 80s, it wasn’t until the ABA merged with the NBA that the three-point line and slam dunks were added to the league we all know and love now.

We were thinking of how exactly the NBA could appear in 50 years. What technological advancements will there be? Will there be flying cars to take players to the arena? Perhaps, but here’s what we believe the NBA will look like in 50 years.

This is something that fans are all clamoring for now, so it might not take 50 years to see! It’s a natural evolution of the three-point line and we feel that players are ready for it, as stars like Damian Lillard, Steph Curry, and Trae Young are all capable of shooting several feet back from the three-point arc.

It would also make the game so exciting, as imagine a team being down by eight points, but two quick four-point shots would get them back in the game. The three-point line can still exist, but the four-point version would add another dimension to the game and force defenders to rethink their strategy.

An exosuit, or exoskeleton, is essentially a suit of armor that can be worn by humans to protect against attacks. However, instead of a loud and uncomfortable suit of armor worn by knights back in Medieval times, exosuits are light, comfortable, and don’t restrict any movement.

The reason for this? Injuries. It’s no fun to see players go down with injuries in the NBA, as some superstars we barely see anymore! The likes of Kawhi Leonard, Zion Williamson, and many more have been sitting out for over a year due to bad injuries.

An exoskeleton would help prevent rolled ankles, knees banging into others, and cracked elbows when landing on the hard floor. We want to protect our star talents so that the very best players are there to entertain the fans and help bring wins to their respective teams.

Apart from wrapping everyone in cotton wool, an exosuit would shelter those limbs and bones from damage.

This one is straight out of the classic basketball video game, NBA Jam. A player’s shoes would glow red when he was “on fire” and any time he shot the ball, it would start blazing and scorch the net. Why can’t this be possible in 50 years?

This would be a joy for fans, because if someone like Steph Curry hits three shots in a row, then his shoes start glowing and his shots would catch on fire until he misses. Real fire might be a bit extreme, but surely there’s some sort of AR tech available to simulate glowing shoes and fiery basketballs.

Come on, we sent a man to the moon, so surely we can have blazing basketballs?

This is something that the NHL has already trialed to great success, as everyone seems to think the outdoor version of typically an indoor sport is a lot of fun. Outdoor basketball would harken back to the street kind that is played in cities across the world.

Of course, weather permitting, outdoor games would be a novel idea that helps to add a bit of spice to the schedule. A couple of outdoor games per year are not out of the realm of possibility when it comes to the NBA.

This might be a bit shaky and hard to watch at times, but it would be fascinating to see the basketball court from the view of the player himself. What does it really look like when a 7-foot-tall defender is bearing down on a player?

It would probably need some sort of tiny camera hidden inside a sweatband, but this seems like a small request for fans that love all sorts of wacky camera angles.

If you’ve been watching basketball for a while, then no doubt you’ve seen a player step out of bounds about 5-10 times a game. For corner three-point shooters, especially, it’s so frustrating for the game when players accidentally step on the out-of-bounds line.

Let’s widen the court a few more feet so that we can erase this annoying turnover from the NBA.

Also, can we please have fans and the team’s benches further back? NBA Athletes are constantly tripping over the feet of players on the bench and even courtside fans. No other major sport in the US has benches and fans so close to the players, so let’s move them back just a bit.

This would be fascinating, as there would be no need to argue with the refs because, well, they’re robots and can’t be swayed by emotion. As well, you know with 100% certainty that the call was right because it has been analyzed by intelligent machines. It would be weird, sure, but you’d get used to it.

The great-great-grandson of LeBron James

We’re going to see the son of LeBron James, Bronny James, play in the NBA one day. While it’s hard to know if he’ll have the success of his father, we’re definitely going to have a generation of James’ stick around for a long time.

We want to see LeBron James IV bring another championship to Cleveland just like his great-great-grandfather did in 2016.

New teams added to the NBA

Who wouldn’t love more cities to get an NBA team? We feel that there’s room for at least two more. One would have to be the rebirth of the Seattle Supersonics, as that iconic team has been out of the league for far too long. An organization based in Las Vegas makes sense, too, as the city already has a WNBA team. Let’s make it happen.

Three points for a dunk

Do fans love well-executed plays that end with a solid two-point lay-up? Of course, but we also adore massive dunks. When you watch a full NBA game, you’d be surprised to see that there aren’t actually that many dunks… maybe 5-6 on a typical night? Well, we want more.

To make a dunk more incentivizing, one should be worth three points, as these are far more exciting and help to energize the crowd. We want massive throwdowns over defenders and epic alley-oops that send the arena into a frenzy.

Apart from having the majority of their own fans in an arena and players not having to travel far, there’s not a giant advantage to home games. A court is still a court and nothing is physically different than any other stadium. But what if all that could change?

The home team should be given a bigger advantage, with something like the ability to have one bonus reward per game. This could be anything from being allowed six players on the court for a few minutes to blocking the opposing team’s net to having special areas on the floor that are worth five points.

This would be incredible, as there would be a special benefit to play on your home court when you’re given prizes that can be used for a short amount of time. We don’t want anything that would skew the favor too much for the home team, but just one little thing that makes it more exciting for the fans in the arena.

This is slightly wacky, so bear with us.

What if it were possible for the four major US sports, being the NBA, NFL, NHL, and MLB, to swap jobs for a day?

Imagine being able to witness LeBron James play as a wide receiver for the Rams? What about Tom Brady trying his hand at playing power forward for the Celtics just for a night?

The whole idea would be to cross-promote all the leagues and find out if any players are actually better in one sport than the one they’re actually paid to do!

It would be just for one day, so don’t freak out too much, and perhaps it would help stubborn basketball fans actually like baseball, hockey, or football, because one of their favorite players is trying a new sport.

Face it; no one likes watching free throws. They’re boring and slow down the momentum to a snail’s pace. So, if a player gets fouled on their way to the hoop and is awarded a penalty shot, we would remove free throws but give them a half-court shot instead.

Sounds weird? Yes, but the NBA needs more excitement and a faster speed, so how much better would it be to see a player knock in a half-court shot instead of two boring free throws. Of course, they would get two chances, we’re not that wild, but as there aren’t enough half-court shots, then this is a good compromise.