If Current NBA Players Were X-Men 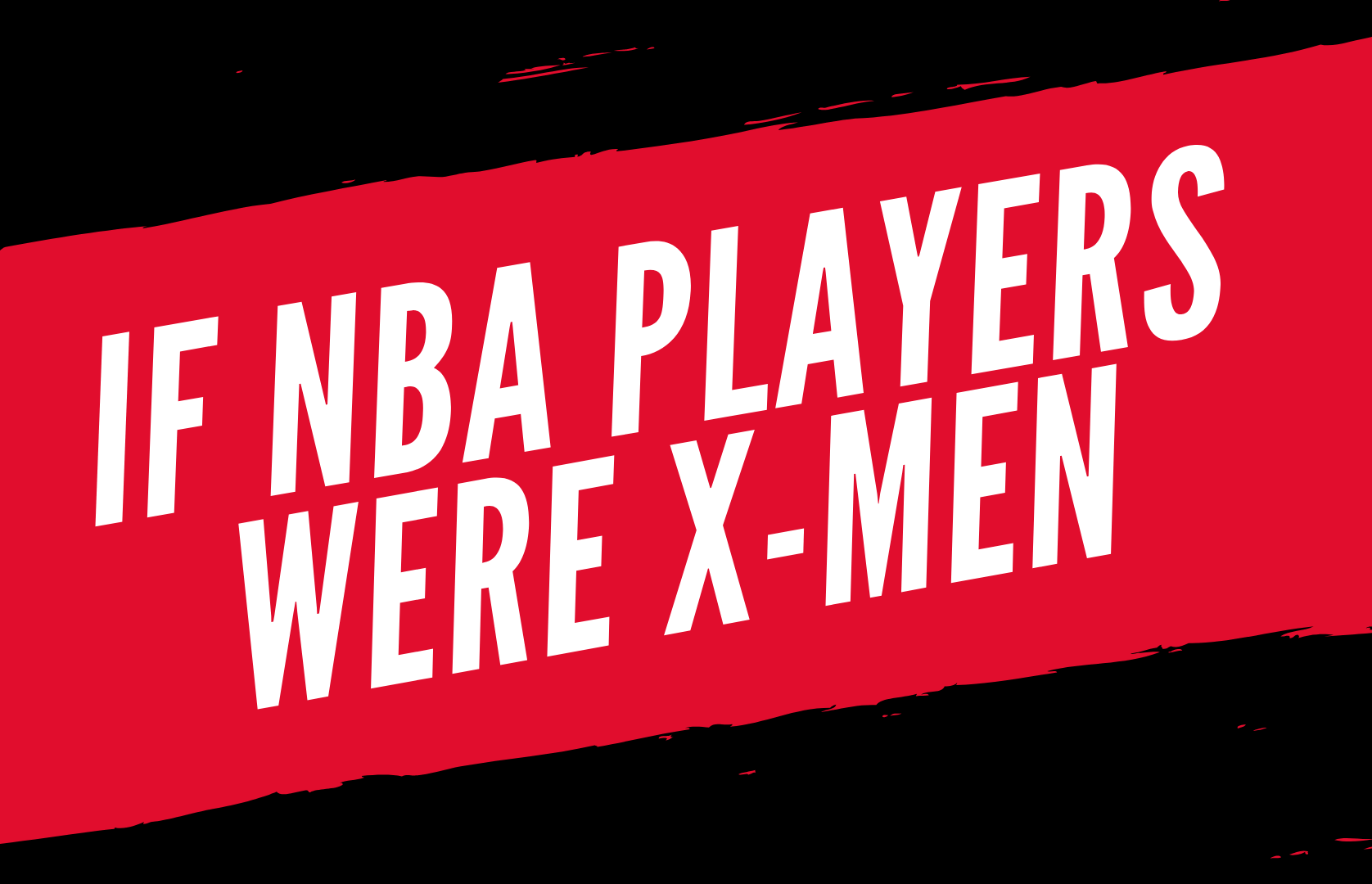 If Current NBA Players Were X-Men

We all know that the X-Men are a group of people with special abilities and exist only in a fantasy world… but what if some of those mutant skills could somehow transfer to current NBA players?

We’re not talking about 90s big man, Xavier McDaniel, who had the nickname “X-Man”, but current stars in the league. There are some players who have uncanny similarities to those X-Men heroes in the comic books. We’ll discuss a few of the most obvious equivalents.

This one needs barely any explanation: When Steph starts knocking in every shot from all over the court, he starts to get red hot. There’s nothing quite like a fiery Steph performance, as he not only has the NBA record for most made three-pointers, but will go down as the best shooter of all time.

One of Steph’s greatest shooting nights was when he scored a career-high 62 points against the Blazers in January 2021. Curry was absolutely scorching and almost set the Chase Center on fire, as he went 18-31 from the field (8-16 three-pointers) and 18-19 from the free-throw line. Just like in NBA Jam, the ball was practically burning from Curry’s blazing hands.

There aren’t many NBA players as gigantic as Jokic, but the big Serbian sets himself apart with his dexterity and graceful movements. Jokic can plow his way to the hoop with nifty post moves, but also pass to open teammates with incredible vision.

No one wants to get in the way of Jokic, and he’s certainly the closest to an X-Men character with metallic skin and superhuman strength. Jokic has already picked up one MVP award, and we wouldn’t be surprised if he gets another for the 2021-22 season, as he averaged 27.1 points, 13.8 rebounds, and 7.9 assists.

Just like Scott Summers a.k.a Cyclops, Ball has laser-sharp vision and can see things differently from everyone else around him. LaMelo has easily become the best and flashiest passer in the NBA, with nearly every night including one or two highlight-worthy assists that get the crowd on its feet.

Just like his brother, Lonzo, LaMelo is a great scorer, but always prefers to pass if it’s the better option for the team. No matter if its full-court lobs, cool alley-oops, or stylish one-handed dishes to fool opponents, LaMelo is the Cyclops of the NBA.

If there’s one basketball player that is pretty durable, heals quickly, is feisty at the best of times, has a polarizing nature, and is usually better alone and not good within a team, then it’s got to be Russell Westbrook.

Westbrook is still a solid player, but after a disastrous season with the Lakers, and bouncing around from team to team in the last five years, it’s getting to the point where finding a good home for Russ is quite the challenge. He’s still got the production on the floor, with great slashing moves to the hoop, solid rebounding, and good hustle skills, so he’s useful somewhere.

Throw some adamantium claws on him and it’s practically Wolverine right there.

There’s really no other way to describe LeBron than just a beast. Much like the X-Men character, LeBron has incredible endurance and durability, often winning games by himself when his team is down. As well, the sheer amount of seasons and games he’s played in is astonishing, with 2021-22 being LeBron’s 19th year in the NBA.

What’s more, LeBron isn’t just physically imposing, fast, and strong like Beast, but has incredible basketball IQ and knows the best time and place to make a bucket or block a shot. You only have to look at LeBron’s chase-down block of Andre Iguodala in Game 7 of the 2016 NBA Finals to see how athletic and smart this player is.

Despite having four championships and four MVP awards, it wouldn’t be shocking to see LeBron play for another five years and hand the baton over to his son, Bronny, as the face of the league.

No one in the NBA can fly quite like Ja Morant. The Grizzlies’ point guard is explosive at getting to the rim, and his ability to float through the air for a nifty lay-up or thunderous dunk is unsurpassed.

It’s now becoming a thing that whenever Morant is on a fast break, everyone in the arena gets out their phones to record him either throw down a huge jam or simply attempt one. Ja’s dunking efforts, even if they don’t go in the hoop, are something to behold. Plus, you know he’s only going to get stronger, faster, and higher as the years go on.

If anyone can slow down time with his astounding speed, just like X-Men character Quicksilver, then it’s got to be Kings’ guard, De’Aaron Fox. He’s lightning fast on the floor and defenders are often left dumbfounded at his rapid moves to the basket.

While Fox might not be the franchise-altering NBA player that many thought he’d be back in 2017, he’s still a dependable option and hopefully better now that the Kings are putting a somewhat decent lineup around him. Still, his quickness is always an advantage throughout the game and his blink-and-miss-it handles are a major strength.

Cable is an X-Men character who is practically part-cyborg, has fantastic accuracy when shooting, and is as strong as an ox. Sound familiar? Kawhi is often joked about as a part-cyborg for his emotionless face, preference for going about his tasks without flair or excitement, toneless voice, and unrivaled work ethic when playing.

Then there’s also the famous robot-like “Kawhi Laugh,” which all but confirmed his status as a half-human.

Seriously, Giannis is just like the X-Men villain, Apocalypse, because there’s almost nothing you can do to stop him.

The two-time MVP winner and 2021 champion, Giannis is the “Greek Freak” with some of the most overwhelming and dazzling moves in the NBA. No basketball player comes close as a comparison, as there’s never been anyone quite like him.

Long, athletic, tall, but agile, Giannis can’t be stopped with a head full of steam running down the court. Plus, he’s also a pretty good shooter now, something that had prevented him from greatness before. Giannis averaged 29.9 points, 11.6 rebounds, and 5.8 assists for the 2021-22 season, and at only 27 years of age, it’s actually scary to think that he’ll only perform better in the coming years.

Young can also get blazing hot like Steph Curry when shooting on the court, but as he’s got the “Ice Trae” nickname and has a shivering move when celebrating something awesome (which is often), we’ll have to go with Iceman as the best link.

Young still needs a bit of work to shoot literal ice out of his hands, but we wouldn’t be at all surprised if he unveils yet another useful option in his bag of tricks. Young could well be the next Steph, as his shooting range is practically limitless and he’s getting better at delivering floaters and alley-oops around the hoop, but as every X-Men character needs an adversary, the classic fire and ice battle will work.

Gambit is one of those X-Men characters where he pops up now and then and you never really know just how powerful he is until you see him up close. Gambit is a bit of a loner, like Jimmy, but can help the team when he’s needed and is always useful in a tough situation.

No one forgets that it was Butler who took a solid Heat team to the NBA Finals in 2020, and despite losing 4-2 to the Lakers, it was a stunning effort from Miami to get so close to winning it all. There’s optimism that Butler and the Heat can make some noise again in the 2022 playoffs, but time will tell.

This is more a comparison just because Franz Wagner is also German like Nightcrawler, but there’s a lot of nascent talent in the skilled Orlando Magic forward. We’re already seeing the ability to drive to the hoop with ease, and while he might not teleport like Nightcrawler, Wagner can still be swift when necessary and leaves opponents looking around in awe.